What do you cook when groceries have all but hit rock bottom (rarely happens) and you have been putting off going vegetable shopping for more than a few days after stocks have dwindled (happens with alarming regularity)? I have bailed myself out by branding a few of these items as exotic celebratory food….for instance, a lone carrot and almost sprouted potato gets incorporated into “veg pulao” with curds to go with it, the ever obliging khichri with omelet (K still thinks this is the ‘actual combination!!) or dahi, or plain achar, macaroni cooked with soup packets with a dash of pepper and oregano from sachets left over from pizza delivery have been presented as exotic pastas… lone carrots have found themselves in fiery bissibele bhat, noodles cooked with pasta sauce, besan ke parathe out of two kinds of flour, uttapams with souring idly batter….these are just a few tricks that I have tried….i once made grilled sandwiches from left over pizza base with onion masala and tomato sauce and K thought it was one of the best meals he has had…..there’s no dearth of things that I have resorted to…..today was one such day….i had 8 pieces of self respecting drumstick, 6 baby potatoes and 2 big tomatoes and some lobia (black eyed beans)…none of them were enough to make a stand alone meal….but I coaxed them to form a coalition and this is what I am blogging about today

In a pressure cooker / pan / kadai, heat oil and splutter the cumin seeds

Add the onions and green chillies and fry till tender

Add the chilly and coriander powders and fry for a minute

Add the washed drumsticks and potatoes, sauté for a minute till the masalas cling onto the vegetables, add chopped tomatoes, salt and 1 cup water and simmer covered for about 6-8 minutes till the potatoes are cooked.

If using a pressure cooker or pan, one whistle is enough. When cool, open and dry up the water to form sauce consistency gravy.

Serve with rotis or steamed rice 1 tspn each of red chilly powder and coriander powder

A pinch of garam masala

In a pressure cooker / pan heat the oil and splutter the cumin seeds, add the chopped onions and green chillies and fry till onions are brown

Add the dry masalas and stir for a minute

Drain the water from the soaking lobia, mix well, add salt and chopped tomatoes and water

Once the lid of the cooker opens, simmer till the most of the water evaporates 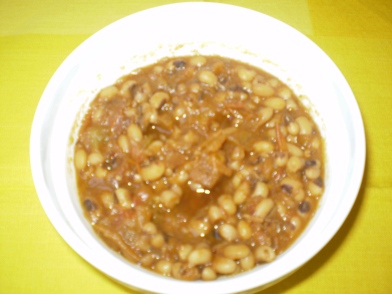