One of the things I have been thinking about increasingly, is how people lived before technology completely took over their lives…..put me within closed doors for a day with no internet, telephone and oh ok…as a last option, the television and you will come back to a really mad person….. I myself am a product of the generation before and after cell phones….i should know!! Hell I worked in telecom for a good 6 years!! and am amazed, that for a nation that took almost a century to get used to a landline phone, we took to cell phones with a vengeance….yet I don’t think life will come to a standstill with or without one of these gizmos…. For one till a few months ago I refused to carry one after quitting my telecom job where it was company given and hence compulsory……….( I am referring to cell phones merely as a technological application that’s become integral to our lives…..i am sure the internet, ipods and other such have as big starring roles)

Have you off late observed people when they wait? At coffee shops, airport lounges, bus stops, on the road, at malls, at theatres…just about anywhere at all…..9 out of 10 times, they will be talking, messaging, playing a game on or simply fiddling with their phones (most likely) or laptops or ipods if they are carrying one…..no one just sits fiddling with nothing (and no we won’t consider pocket billiards played by the men folk)…doing nothing…. Just plain and simple waiting….have we become unable to manage our time, or solitude? I don’t know….. I know I get damn restless if I don’t have my phone nearby, cos I don’t know what the day entails (I am a queen of to – do’s remember?), what reminders I have set for myself…..what a disaster the day will be if I don’t remember them all….

So at such a time……when you can’t deny that technology has made it so much easier ( hell I am a blogger no??) ……….it’s such a refreshing thing to celebrate the birthday of my aunt….my mother’s cousin…she completed 86 years a few weeks ago…..lets call her E……a remarkable lady, now frail but (touchwood) in great health….she’s someone I marvel at….except for shaky teeth and very little hair, and of course wrinkled skin, she has no ailments….no diabetes or blood pressure or even a problem with her eyesight!! She’s lived a tough life….bringing up and supporting a large family of siblings, taking whatever lemons life threw at her and making lemonade…..marrying, having children, seeing them grow and spread their wings……they are grandparents now…..rarely will you see her without her smile…..always a kind word….she will even enquire if my mother in law’s maid is regular ( and not in an intrusive manner)….full of love and concern…go to visit her and every other sentence will be punctuated with “what will you eat ma? Have something no?”…what I find most remarkable about her is her ability to remember dates, wedding anniversaries, death anniversaries, birthdays etc of more than 100 people….without any calendar, reminder or to do list……anyone in the family is sick and E is the first one to make an appearance, bearing fruit (or whatever else you can eat)…..death in the family and she will be by your side to keep vigil and comfort you….and difficult as it may be…..has been faithfully attending church twice every week for almost all her life…..and I am not talking about lip service….she will kneel and pray for family and the huge extensions for more than an hour twice a day…..i don’t look at it as a question of faith or the lack of it…even as a practice, imagine kneeling!! For an hour…..imagine that kind of passion for what you believe in!! She’s like a ready reckoner!! If you are confused about how you are related to so and so…..can’t remember an important date or occasion, need a ear to listen to you or anything else that others don’t have the time for, E is my one stop shop….my lady for all seasons!! 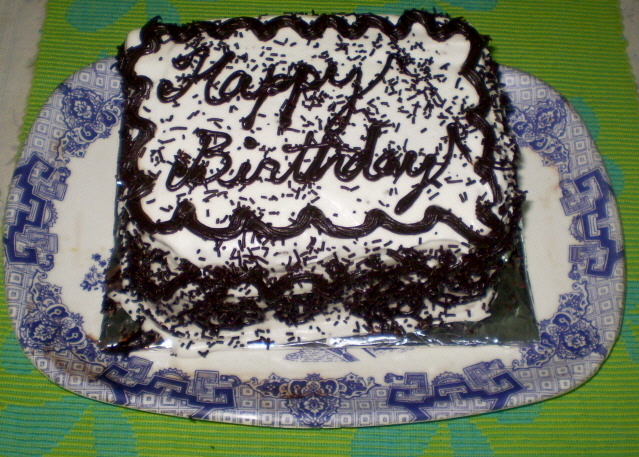 I baked this cake for her…and she couldn’t believe I made it at home….she doesn’t know that I blog, so I didn’t tell her she will be making an appearance….happy birthday!!

p.s: Aunty E’s birthday was on the 25th of march….and i wrote this post, overwhelmed by our meeting a day later…..it lay languishing in my drafts, till yesterday, i saw the theme for JFI which is love…..i think there can be not better entry from me than this….so off this goes….to JFI which is celebrating Love….what a fantastic theme…what is food if not prepared with love?? JFI is the brainchild of Indira, this month being hosted by two wonderful women Pratibha and Jigyasa at Pedatha…..

p.s: in other stories (which will make this post even more lengthy!!) i have been swamped, stumped and drowned with love and appreciation!! this beautiful lady and i have discovered each other with a 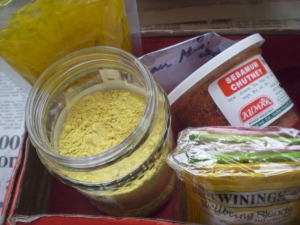 vengeance, a day is incomplete without us saying hello…and much time has been spent chatting (on the internet) on stuff which makes us believe we are in the same room, sitting accross each other with cups of chai (hurrah for the virtual world….err i know this is in total contradiction to how my post began)…..i got this wonderful package with some heady stuff from her….methkoot powder (in the bottle, sans the lid….i had to open it before i could take the pic…my mother was hounding me for a taste), some yummy sesame-peanut chutney powder, mango murrabba (which is a sun dried pickle), an assortment of flavoured teas, and seeds of african marigold which she says “will bloom into the brightest of orange flowers” (amen)….when they do nan, they will fill my home with your love…..thanks….

the second one was most unexpected…..my dear namesake, tantalised me with a comment, then on

chat,shealso called me and i didnt believe it was her, also i was in the middle of some shopping, so i think i was a tad rude…..but the gift from gurgaon stumped me totally….i came home after an ill planned afternoon(scorching at 41 degrees C) shopping trip, dehydrated by the heat and disgusted by the autowallahs to find a parcel on the table…..for a flash second i thought it was self addressed….then realised it was not….apart from the same name, we share the most bizzarely similar emotional and personal qualities…..down to our handwriting!! she saw this post of mine and wanted to let me know….and built the package around it!! a pack of my beloved potato flakes, some all purpose cooking paste, fake chicken legs (oh!! she remembered from our first conversation!!) and home made yummy nankhatais (which again didnt make it to the pic cos they got demolished)

and now to Deeba, my dear dear friend, inspirational baker, super mom and enthusiastic comrade!! one mail and i was presented with a gift of the most wondrous Thai basil….and before i could write a post to thank her, she gives me this award…with some kind words too…..the basil is growing well and so is my admiration for her…..this is the second award from Deeba…thank you girl!! you sure sent me into the orbit of happiness with this one!! muaah!! (there will be another post to pass this on…)

woo hooo…i think this is enough love to spin me around for a while….so i will put a fullstop here and leave you with the recipe for the cake!!

I baked the cake in a rectangular cake tin. Cut it in half and sliced each half into two to give me 4 layers. Trim the edges to make an evenly sided cake of 4 layers.

Whip the refrigerated cream and sugar with an electric beater on medium speed for 10 minutes or till it stands in soft peaks.

For the chocolate ganache

½ cup butter ( or a little less if you will prefer)

On a double boiler (or microwave) melt the butter and chopped pieces of chocolate. Add 2 T of powdered sugar and stir till shining. Set aside to cool

To assemble the cake:

Reserve 1-2 T of the chocolate ganache and spread a generous tablespoon of it between the layers of cake leaving out the top layer.

Cover all sides of the cake with the white whipped cream. Spread as evenly as you can with a spatula or a long knife.

Make a cone from a triangular piece of butter paper and put in the remaining chocolate ganache into it. Pipe designs onto the cake as you like. Sprinkle chocolate sprinkles over it.

Refrigerate at least a couple of hours to set. Remove from refrigerator at least 15 mins before serving.