If you are a food Blogger and follow a few forums on social media, you would not have missed the Blogger’s Table. The brainchild of Sid of Chef at Large which is a forum of people who are passionate about two wonderful things – food and writing. It is a marriage made in heaven. As a Hyderabadi watching the shenanigans of the bloggers from the more active cities of Bangalore and Delhi, I was filled with a fair bit of envy. A few weeks ago though, I was excited to share the very first invite to do a restaurant review from the Hyderabad Blogger’s Table with my very talented friend and photographer extraordinaire Siri who blogs at Cooking with Siri. If you all know me and my blog, you also know that I am terrible with timelines! So this comes a few weeks late!

With a lot of messages across fb, twitter, whatsapp, email, phone calls and any other possible mode of modern communication, the fixing of this lunch date went back and forth. Siri and I finally managed to land up at the designated time on a Saturday afternoon at the Thai Pavilion at the Taj Vivanta. This hotel is the latest offering from the renowned Taj group that has firmly made its presence felt in food loving Hyderabad. I had on earlier occasions been to Viva, their all day diner to dig into one of the most beloved Hyderabadi preparations of Khichdi and Kheema. Truth be told, for a pucca Hyderabadi this is a dish that seldom makes the cut outside of a home kitchen. So if the dishes I had eaten earlier were any measure of judgment, I was sure I would have a good meal.

We arrived and were immediately ushered into the pleasantly lit restaurant on the first floor of the hotel. Welcomed by warm smiles of the staff, we chose to sit near the open kitchen to get a better look and feel of how the food was being prepared. It’s always tricky to have an open kitchen especially in an upscale establishment. It leaves very little room for a mess, leaving the chefs vulnerable to scrutiny. The kitchen looked impeccably maintained with a large steamer occupying pride of place. After all what is an Asian kitchen without its steamer!

A cheerful chappie who would be at our beck and call for the rest of the lunch appeared and asked us what we would like to drink. We asked him to bring us anything he would recommend and he went off to fetch us what would be later known as a “Thai Cooler” an overtly sweet concoction of sprite, Pepsi, orange crush and kiwi syrup and “Farahaan” which was like a virgin Mary, made of guava juice with Tabasco sauce, served chilled in a glass rimmed with red chilli powder and salt. I instantly disliked the Thai Cooler because it was too syrupy and sweet for my taste and asked for another Farahaan.

Meanwhile we were joined by the ever smiling Chef Rajeev Janveja, the Executive Chef of Vivanta and the man who has brought Thai Pavilion to Hyderabad. The Restaurant is a line of signature Thai restaurants and the Taj Vivanta will have it across its various upcoming properties in the future. The Hyderabad restaurant is the second after the flagship one in Mumbai. Chef Rajeev as he is known, with over a quarter century in the food business in general and kitchens of some of the best known restaurants across the country and abroad, took us through the journey of setting up and running the Thai Pavilion and the plans he has for it. Chef Rajeev has handled the launches of some of the most celebrated restaurants in the Taj group. He has also worked in Germany and set up the food courts you encounter at the Hyderabad and Delhi airports. A genial man with true passion for what he does, it was evident he believes that god is in the details. Each item on the vast menu, which I must say has a good array of offerings for both vegetarians and non vegetarians, has been picked, honed and perfected by Chef Rajeev and his team. Some of the staff are from Thailand and they all undergo training at the main kitchens in Mumbai.

While we sipped on our drinks and bantered with the Chef, our food began to make an appearance at the table. We began with two salads. Raw Mango Salad and Som Tam or Young Papaya Salad. Both had a very similar look and feel and after acting like two nuts trying to take (and failing miserably in my case) pictures, we dug into the salads. I have had papaya salad and made it too several times, so was expecting a familiar taste. What surprised me was the spice factor of the young papaya salad which for me was a little dampener.  Delightful however was the fresh taste and crisp flavours of the Raw Mango Salad. The subtle flavours and had many layered crunch added by the water chestnut and pomegranate seeds was very nice. I have never had raw mango as the main item in a salad and I was pleasantly surprised by how fresh it tasted. So for me, the choice, if I had to make one would definitely be the Raw Mango Salad if it was on the menu.

What was interesting was that Chef Rajeev telling us, that in Thai food, there was no real segregation of foods and courses and that pretty much anything can be had at anytime. But since most people are used to a pattern of food coming in as starters, soups, main course etc, for the sake of convenience and familiarity, the menu is sectioned similarly. He also told us that most of the ingredients are sourced directly from Thailand to maintain the quality and authenticity. The hotel arranges for fresh produce including seafood to be flown in weekly.

We enjoyed a round of appetizers next. For the vegetarian starters there was Mee Grob – or what I liked to refer as the Thai version of sev puri! Little crunchy cups made of refined flour filled with tangy crisp rice noodles, Corn Cakes – these were interestingly flavoured with red curry paste and had a nice robust flavour and Vegetable Spring Rolls – these were nothing much to write home about, pretty standard, though I have eaten better.

For the Non-vegetarian bit, there was the Chicken in Pandanus Leaf, succulent pieces of marinated chicken, wrapped in a fragrant pandan leaf and steamed and then fried to finish it off. The chicken and pandan flavour is a delicate match. Satay Gai or the Chicken Satay is a pretty staple appetizer in Thai restaurants. Skewered pieces of chicken breast, barbequed and served with a peanut sauce. I must say that I have eaten better Satay and while there was nothing wrong with the Satay Gai, it was nothing spectacular either.

The next item was the Pia Nueng Manao or the John Dory fish steamed and served with a thick spicy sauce flavoured with coriander, peanut and chilli sauce. This was a good dish and I would definitely order it again for its subtle and delicate flavours. There was also the Poo Nim Krob or Soft Shelled Crab, batter fried to crispy perfection. Crisp on the outside and soft and yielding on the inside. I loved this dish and would totally be ok to make a meal out of it the next time!

Next we were served soup. We tried the Chicken Tom Yum which was a sharp spicy soup with the nice taste of lemongrass standing out. Perfect for a light meal or a rainy cold evening. The vegetarian option of Coriander with Vegetables soup was lemony but not much else. It lacked both depth and personality and is something I would not recommend.

When the main course arrived, I was convinced I couldn’t eat another morsel. The staff tempted us with a table full of yummy looking items. On offer were a lot of dishes, the names of which I could hardly pronounce, leave alone remember or spell. The kind chef offered to write it all down for our reference and hence I can actually post the names of every dish!

We had Phad Thai Je (Stir fried flat rice noodles with vegetables). This is very different from any of the Pad Thai noodles I have had, tho I dont know how authentic they were, it was sweeter than most I have eaten. I quite enjoyed this dish on its own. Imagine my delight when I saw a dish made of Morning Glory Greens. A variety of this is called Thootikura in Telugu and we eat it as often as we can get it in the market. So to taste a Thai version of Phad Phak Bung Tao Jiew (Stir fried morning glory with yellow bean sauce) with crunchy garlic chips. This pairs well with a mildly flavoured rice.

The Phad Prio Warn Tao (Silky bean curd with sweet and sour sauce) was mild and I enjoyed the texture of the tofu, but the sauce was nothing spectacular. The tofu along with most of the exotic ingredients is flown in from Thailand weekly to ensure the authenticity of the recipes and maintain consistency of taste. From the array of vegetarian dishes, the Yod ma Prao Bimmapen (Palm heart with cashew nut) would easily be my pick. Tender, crisp tangy young palm hearts cooked in a sauce that balances all the flavours. I wanted more of this dish. Contrary to my love for water chestnuts, the Hei Phad Prik Haeg (Water chestnuts and cashew nuts with red chilli paste) under whelmed me. 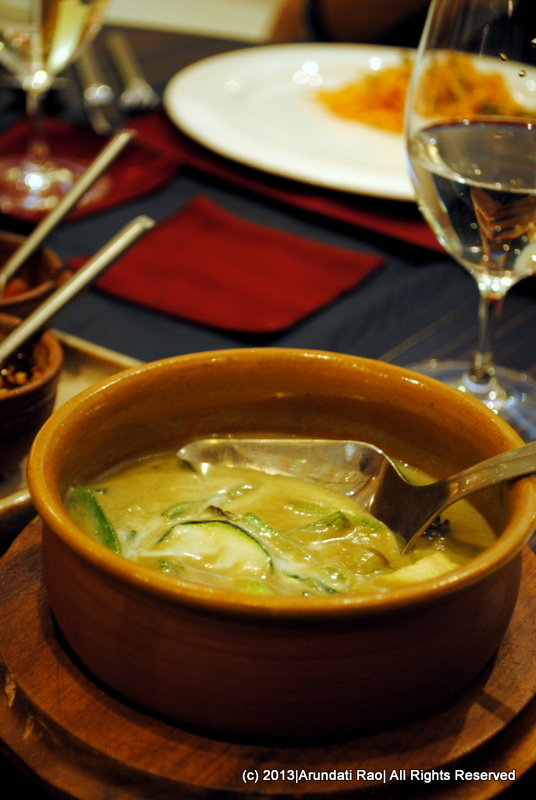 There was also the mandatory Thai curry – Gaeng Kiew Warn Je, we had a green vegetable curry which was mild and full of flavour and went excellently with the steamed rice.

For the non vegetarian dishes, the Moo Phad Krappaw which is stir fried pork with garlic, chilies and basil was terrific. Smoky pieces of pork in a sauce tempered with holy basil and garlic. It hit all the right spots. In contrast to this flavorful dish, I found the Chicken dish Kai Phad Med Mamuang which is stir fried chicken with cashew nut lacking any particular flavour.

Later, when I for sure this time felt I would need to get a room and pass out into a food coma, came the most terrific end to this wonderfully indulgent meal – Tub Tim Grob which is a dessert made of tapioca pearls, tapioca flour, coconut milk and water chestnuts, served over crushed ice. I have had this dessert in other thai restaurants, but this was something else. Starting with the presentation – The dessert came nestled on a bed of crushed ice, and a tender coconut served as the bowl, adorned with a single purple orchid which is also associated with Thailand. The subtle sweetness of the sugar and coconut milk, creaminess of the coconut cream, flavour of rose, each of the layers sublime and delicate. Spoon after spoon of this delicious dessert was savoured in complete silence. You really do need a personal moment to enjoy this beautiful dessert. It is cooling because of the ingredients and also as it is served chilled. To help with calming the palate after fiery spicy Thai food. A fitting end to a lovely meal.

I would definitely recommend a celebration meal at the Thai Pavilion. They do know how to make the occasion special, with both the food and service.