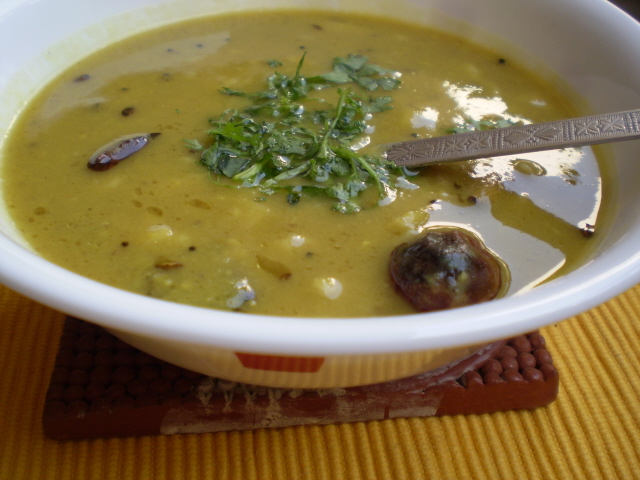 Ever put off something till the context completely changes and you don’t know if you want to finish what you decided to do or abandon?? That’s exactly what I am going through now…..i have had such an eventfulfew weeks that I had to put off doing what I planned to cook for RCI: rajasthan till two days ago….and when I was finally ready with the post, the same evening, Jaipur the capital of Rajasthan was rocked by several serial bombs that have taken many lives and injured many people…….while I couldn’t believe what I was seeing on the television, I completely forgot about my post…..and this morning, I wondered if I should or should not post what I wanted to say and do….

Sounds frivolous for me to be extolling the fragrance and flavour of what I made, while there are people mourning the loss of lives, loved ones and livelihood, while still many hundreds come to terms with this reality of terror…… no one will know why all that happened did happen…..the pink city….drenched in innocent blood…..the community of people who epitomize colour, covered in a way that sends more than just a shiver down my spine…..the people, the crafts, the grandeur, the flavours and smells of one of the most vibrant places on earth, today not knowing why their joie de vivre is snatched away from them…….

I have never been to Rajasthan….and it was on my “places to see before I can’t walk” list for a while now……K and I planned a trip there this sept and god willing we will still go….to the desserts, to the people so talented, so full of life and colour and spirit…..my heart goes out to all of them….for their loss, which is every bit ours…..i hope for the people, the resilience to bounce back…..and not allow the people who did this, the triumph of crippling our soul…….

When foodie events are announced all over the blogosphere, I always feel a little excited and my mind more than wants to participate….however, life sometimes has a way of kicking you a little harder and telling you that no matter how obsessed you may be with blogosphere, there is a real life to live and for most part of the time you can regretfully participate by doing a round of the round ups!!

So plans were made and research done to defy all this……because there were these two recipes that I knew I wouldn’t get down to making ever if I passed up this opportunity……and yet I found myself scrambling at the last minute…….considering I am hosting an event this month…..i just hope I fall into a minority category of truant food bloggers, or the good doctor will have my head on a plate!!

Makai ki sabzi and dal dhokli were my chosen two….makai because I have never used corn when I cook tho I always order it when we are eating out….and the picture in the book looked so tempting, the gravy creamy and flavourful and crying out for some hot rotis…..and dal dhokli cos I had it at A’s house one afternoon and I loved it……the creamy texture of the cooked rotis in the flavourful dal (with that much of ghee!! It had better be!!) And I kept telling her over mouthfuls, that it was indian pasta, such a filling meal and so nutritious…… but I had all these demons of imminent disaster over me looming large…..

I made them on two consecutive days and now I realize that the pictures look so similar!! Or maybe all curried and gravied indian food looks the same…..the Makai ki sabzi was spicy and the sharp flavours make it a good dish to put on a party buffet, best eaten with a light pulao or rotis. 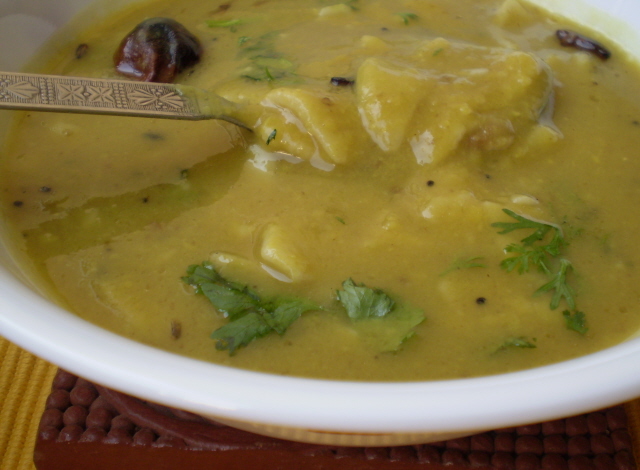 can satisfy me!! The warm tangy flavour of the dal, mingling with the ghee

seduced spices….ohh!! awesome….and total comfort food……infact when I asked A to mail me her recipe,

she began the mail with “ghee….lots of it” and warned that it would be a waste to

scrimp on it while making this…….tells me how much the cuisine of this royal land is influenced by what else!! Royalty!! Everything is rich, flavourful,

exotic…not to mention cooked in pure ghee! These two are my entries to RCI – Rajasthan…..being hosted by Padmaja of Spicy Andhra….RCI celebrates regional cuisine each month and is the brain child of Lakshmi of veggie cuisine. dal dhokli is also my entry to valli’s roti rendezvous….join her at the roti mela….she dished up quite a storm with the dosa mela last month!!

Pressure cook ½ cup tur dal with haldi till done. The dal should be roasted in a pan till golden, with one teaspoon of ghee.

Heat a tablespoon of ghee, temper with half a teaspoon of mustard, cumin, a pinch of hing, one dry red chilly, 1/3 teaspoon of chilli powder, one bay leaf, two cloves, one green cardamom. Garnish with fresh coriander leaves, serve hot and sink in!!

Steam 1 ½ cups of fresh or frozen corn kernels. Set aside

In a pan, heat 1 T oil, splutter ½ t each of mustard, cumin, nigella (kalonji). When they splutter, add 1 t of finely chopped green chillies, add the onion paste and fry on low heat till browned. Add a pinch of turmeric and stir for half a min or so.

Beat ½ c curd with 1 T gram flour add to the onion mixture and cook stirring for a couple of minutes.

Add salt to taste, cooked corn kernels and simmer. Add ½ cup water because the gravy is quite thick at this stage. Check seasonings and adjust. Garnish with fresh coriander leaves and serve hot with rotis or pulav.